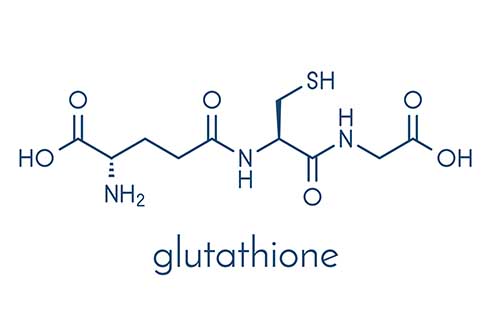 Glutathione (pronounced “gloo-tuh-thigh-own”) is the most powerful antioxidant.  It is the master detoxifier and conductor of the immune system. Glutathione is a simple molecule that is produced naturally by the body all the time.  It is a combination of three amino acids—cysteine, glycine, and glutamine. It offers anti-aging benefits, detoxifies the body, promotes muscle recovery, and supports the immune system.  Your body naturally produces its own glutathione; however, a poor diet, pollution, medications, stress, toxins, trauma, aging, infections, and radiation all deplete your glutathione level.  As your glutathione depletes, your liver gets damaged and overloaded, making it hard for it to do its detoxification task.

Glutathione delays aging, helps make skin smoother with a more even tone, lightens age spots, and gives a rosy glow to the skin.  Glutathione is produced naturally within the body and is present in every cell. It’s our very own master antioxidant and most powerful detoxifier, but our levels deplete as we age.